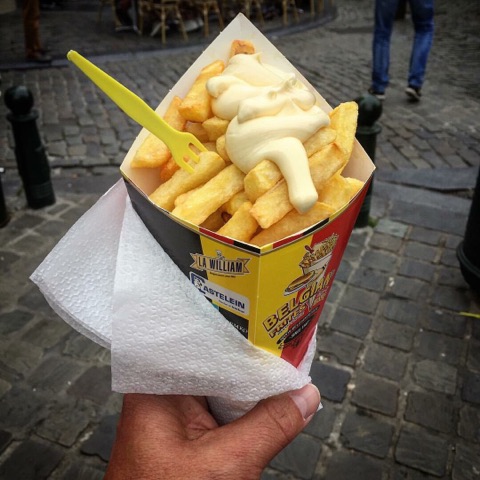 This month, ChezSlaughter Chocolate of Shreveport-Bossier City, LA is featuring the country of Belgium in a ‘Summer Travel Series’ on The Chocolate Blog.

Behold The Belgian Frite
Frites – or French fries – are as much a part of the Belgian culture as chocolate, beer and mussels. With more than 4,500 frite shops dotting the Belgian landscape and dozens of sauces accompanying the culinary delight, Belgium’s love affair with the humble potato is nothing if not passionate.

French Fried History
A visit to the Frietmuseum in Bruges (yes, Belgium has a museum wholly dedicated to the French Fry!) reveals how the wild potato became a cultivated plant in Peru, made its way to Europe and then to Belgium.

According to frite folklore, a frozen river in 1680 forced the poor inhabitants of the Meuse Valley to find something other to eat rather than fish. The tale goes that potatoes were cut into the shape of fish, fried and voila – the frite was born!

But how did the word ‘French’ get tied to the ‘frite’ or ‘fry’? Some say it was in the cutting of the potato, which was ‘frenched’ meaning to ‘cut lengthwise’ . Others say American soldiers coined the name when they came to Belgium during World War I and called them ‘French’ because it was the official language of the Belgian Army. Still others claims the fry has its origin in France.

While the origin of the frite is debatable (no one really knows), most agree that Belgium has put this popular snack food on the culinary map.

What Makes Frites Belgian?
Although the French Fry is world renowned today, what makes it uniquely Belgian? The trade secret is that Belgian frites are fried twice. This induces a chemical process which produces a crispy, brown fry that is completely cooked.